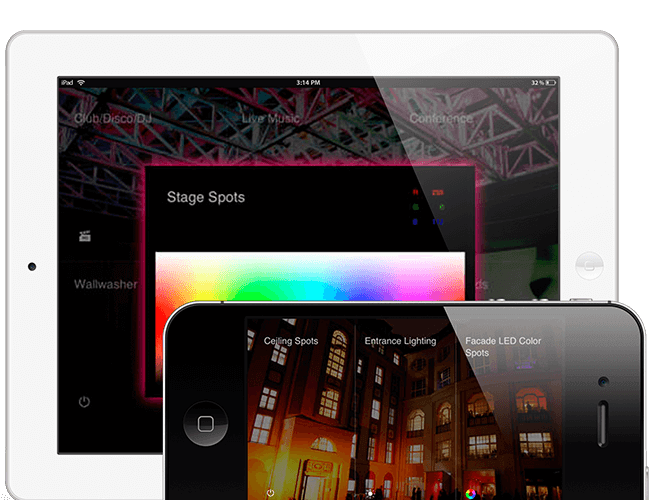 Based on an existing app, we set up a new implementation with hybrid technologies and placed this in the App Store, Play Store, etc.

To be able to control their lighting system at the touch of a finger.

Lighting Tab is an easy-to-use app to control lighting elements in a professional environment. Anyone with a NetComposer, the light control centre of the Eutrac Company, can control lamps, spotlights, LEDs—in fact entire lighting systems—with ease. Once programmed, the user is able not only to turn connected lights on and off but also to control brightness, colour values and colour temperatures. Pre-programmed sequences can be called up on a smartphone or tablet with a single tap, while the user can control servo sequenced spots from their Android or iOS device with ease.

DALI and DMX—these are the names for the control protocol of the house automation and event technology, which communicates with controllers and lights. Allowing the app to communicate with the controller presents quite a challenge. It is possible to control lamps and lights on various channels in the same way as running numerous controllers in parallel. The app should also behave as similarly as possible on both Android and iOS, so that the user can be flexible in device choice. At the same time, the control elements of the app should be intuitive and user-friendly, as usual.

The EUTRAC app was different to all other apps we had worked on before, since it was set up as a hybrid app. This type of app makes it relatively easy to develop a similar impression on iOS and Android. Beneath these UI levels is the core application for communicating with the networks through Multicast and UDP Datagrams. These are implemented natively for Android and for iOS, to use the most efficient means of communication for the device in the performance-critical network level. It sounds technical – and it is.

At the same time, this project had certain components which we loved, and which were unique to it: Such as being able to control the atmosphere in a room—or the lighting mood across an entire floor—by smartphone. Impressive and fun at the same time. In the development process, we ran into very elementary problems: In the beginning the servo-controlled spot didn’t work at all—then it wouldn’t work in the way that we wanted it to. Then other devices, like LED strips or colour changers, needed to be installed and comprehensively configured before we could finally try to get the app to communicate with them. It was even more satisfying to be able to create such a difference in the real world with the tap of a finger.

Behind the scenes or: My lightbulb moment

This app also needed to be properly tested, and our office wasn’t the worst place to do that: with four-metre-high walls, semicircular vaulted ceilings, and with my colleagues as moving targets. But oh boy, if they’d had a quality control coming up… And as soon as another function was successfully implemented, I could give my lighting design abilities full rein: to sink the whole office in moody blue or the corridor in grassy green. It’s impressive how light can change a room. After a while, when they heard the servomotor murmur, they knew it was time to duck for cover, or be ready for my next round of “colourful” experiences. The lesson I learned: not everyone is made for the spotlight, and some prefer in fact to hide their light under a bushel. 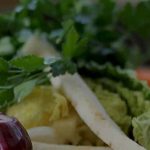 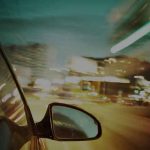